How language shapes the way we think? 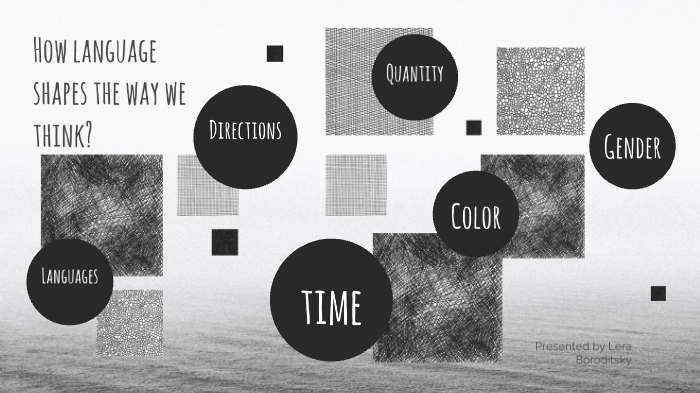 There are 7,000 languages used throughout the world – and they have different sounds, vocabularies, and structures, but do each of them form a particular way of thinking?

Below is a review of Lera Boroditsky, a cognitive scientist about how language can construct the way we think

I will speak in language This is one of the human magical abilities that humans have. We can transmit very complicated ideas. So, what I’m doing now is making sound with my mouth, while sighing. I make tones, hisss, and puffs, they induct vibrations in the air.
The vibrations in the air are traveling to

You, then hitting the eardrum, then the brain receives vibrations from the eardrum, and transform it into a thought.

Hopefully, that happens. Because of this ability, we humans can continue our ideas through the vastness of space and time. We can deliver knowledge into

other people’s thoughts. I can input a new bizarre idea into your head right now. For example, I could say, “Imagine jellyfish dancing in a library, while thinking about the theory of quantum mechanics.”

If your life just go along without significant obstacles, maybe you were never thought before. But, I can make you think it through language.

then a question rises: Is language shapes the way we think? Well, it’s an ancient issue. lots of people have speculated about this like forever. Charlemagne

Holy Roman emperor, said, “Having a second language is like have a second soul” – this is a strong support that language shapes reality. But on the other hand, Shakespeare has Juliet say, “What’s in a name? Roses with other names would smell as sweet. “
Well, maybe it means, language does not shape reality.

This debate has been gone back and forth for thousands of years. But until recently, there is no data that proves one of them. Recently, in my lab and other labs in the world, research began and now we have scientific data to answer the debate.

I will tell a few of my favorite examples. I will start with an Aboriginal community in Australia that I had a chance to work with. They are the Kuuk people

Thaayorre They lived in Pormpuraaw at the westernmost edge of Cape York. What’s interesting about Kuuk Thaayorre is – they don’t use words like “left” and “right”, they use the cardinal direction instead everything: north, south, east, west. When I say everything, it’s really everything. There could be a sentence, Oh, there are ants to the southwest of your feet. ” Or, “move your cup north-northeast a little bit.” In fact, in Kuuk Thaayore’s language, to say hello we say, “Which way are you go?” And the answer is, “Northeast northeast in the far distance. How about you?”

So imagine you are walking, and whoever you greet, you have to report the way of your journey.

But, that would make you quickly get oriented, right?
Because you can’t possibly say hello if you don’t know the way you’re going. In fact, people who speak like that oriented very well. They know the direction better than most humans could. We used to think that humans were worse than other creatures – for several biological reasons: “Oh, we don’t have magnets on our beaks or scales.” No; if language and culture trains to do it, actually, you can. In fact, there are people who oriented very well.

So that we have an agreement – about how different the way we know the direction is, I want you all to close your eyes for a second – then point southeast.

It could say we have low accuracy in recognizing direction. This is an example of a big difference in cognitive ability across languages, right? Where one group — very
distinguished group like you guys — doesn’t know which way is which, whereas in another place, I could ask five-year-old kid and they would know.

There are also really big differences
in perception of time. Here I have pictures of my grandfather at different ages. if I ask an English speaker
to organize,

time, they might lay it out this way,
from left to right. This is related to the writing direction    If you were a speaker of Hebrew or Arabic, you might do the opposite,

But how would the Kuuk Thaayorre, the Aboriginal group I just
told you, do it? They don’t use words
like “left” and “right.” Let me give you hint. When we set people facing

Here’s another really smart human trick. Suppose I ask how many penguins are there. I know exactly how you answer it. You count it, “One, two, three,
four, five, six, seven, eight.” You named each one with a number, and the last number you said was the number of penguins. This is a little trick that was taught as kids. We learn the sequence of numbers and apply them. A little linguistic trick. however, some languages don’t do this, some languages ​​do not have words for numbers. The languages that don’t have
a word like

“seven” … or “eight.” In fact, some language speakers don’t count, and they have trouble determining the exact number. So, for example, if I ask you
to match this number of penguins
to the same number of ducks, you would be able to count them. But, they’re who don’t have
that linguistic trick can’t do that.

Languages also differ in how to
dividing the color spectrum — the visual world. Some languages have lots of words for colors, some only have a couple words,
“light” and “dark.” And languages differ in putting boundaries between colors. So, for example, in English,
there’s a word for blue that covers all of the colors that you can see on the screen,  but in Russian, there is no word for “blue”. Instead, Russian speakers have to differentiate between light blue, “goluboy,” and dark blue, “siniy.” So Russians have a lifetime of experience of, through their language,
differentiate these two colors. When we test people’s ability
to perceptually separate these colors, what we find is that Russian speakers are faster across this linguistic boundary. They’re faster when differentiate between light blue and dark blue. And if you observe at people’s brains as they’re looking at colors — for example you have colors shifting slowly from light to dark blue — the brains of people who use different words for light and dark blue will give a surprised reaction as the colors shift from light to dark, as if, “Ooh, something has categorically changed,” whereas English speakers brains, for example, that don’t make this categorical distinction, don’t give that surprise, because nothing is categorically changing.

Language has all kinds of unique structural features. This one is one of my favorites. Lots of languages ​​have grammatical gender; each noun assigned a gender, often masculine or feminine. And these genders differ across languages. for example, the sun is feminine
in German but masculine in Spanish, and the moon, vice versa. Could this actually have something for how people think? Do German speakers think of the sun are more feminine, and the moon more masculine? Actually, it turns out that’s the case. If we asked German and Spanish speakers to describe the bridge, as in this picture – coincidentally “bridge” happens to be grammatically feminine in German, grammatically masculine in Spanish — German speakers are more likely to say bridges are “beautiful,” “elegant” for bridge, or any other words that are considered feminine. Whereas Spanish speakers will be more likely to say “strong” or “long”,
which is masculine word.

Languages also differ in how describing events, right? For example, an event like this, an accident. In English, it will say, “He broke the vase”. In a language like Spanish, you might be more likely to say, “The vase broke”, or, “The vase broke itself”. If it’s an accident, you wouldn’t say
that someone did it. In English, weirdly, we can even say things like, “I broke my arm.” Now, in another of languages, you couldn’t use that construction
unless you are a psycho and you trying to break your arm — and you succeeded. If it was an accident, you would use a different construction.

and they’re more likely to remember
that it was an accident. They’re more likely
to remember the intention. So, two people watch the same event, witness the same crime, but remembering different things about that event. This has implications for eyewitness testimony. It also for blame and punishment. So, for example, there is an English speaker and I show someone breaking a vase, then I say, “He broke the vase,” instead, “The vase is broken,” even though I’ve witness it myself

Now, I have given several examples of how language can profoundly shape the way we think, and it happens in various ways. So language can have big effects, like in space and time, where people can layout space and time in completely different. Language can also have
really deep effects – like what we saw with the case of number. Having count words in your language,
having number of words, will opens up the whole world of mathematics. Without counting abilities, do algebra is impossible, you can’t do any of the things that would be required to build a room like this or make this broadcast, right? this little trick of number words gives you a stepping stone into a whole cognitive realm.

Language can also have really early effects, what we saw in the case of color.  These are really simple,
basic, perceptual decisions.
We do thousands of times all the time, but, language is getting in there and influence with these tiny little perceptual decisions that seem trivial. Language can have really wide impact. The case of grammatical gender
maybe a little silly, but, grammatical gender applies to all nouns. That means language can shape
how you’re thinking about anything that categorized as noun. And that includes a lot of stuff.

Finally, I gave you an example
of how language can shape things
that have personal value to us —
for instance, like blame and punishment or eyewitness memory. important things in daily lives. the beauty of linguistic diversity
is that it reveals to us how ingenious and how flexible the human mind is. Human minds have fabricate not only one cognitive universe, but 7,000 — there are 7,000 languages spoken around the world.  And we can create many more — languages, are living things, things that we can hone and change to suit our needs. The worrying thing is, we are increasingly losing linguistic diversity all the time. About one language is lost a week, and by estimates, half of the world’s languages will be gone in the next hundred years. And the even worse news is that now, almost everything we know about the human mind and the human brain is based on studies of, usually, American English-speaking undergraduates at universities. They cannot represent all humans. Right? So, our knowledge of the human mind is actually very narrow and biased, and our science must strive to be better.

I want to close with this last idea. We know speakers of different languages ​​think differently, but the point is not about how people in other parts of the world think. It’s about the way you think. About how the language you use shapes the way you think. That gives you the opportunity to ask, “Why do I think this way?” “Can you think any other way?” And also, “What thoughts do I want to make?”

Thank you very much. Source: TED

Translated24 is a group of creative thinkers with a focus on translation, Transciption, here to guide businesses through the digital atmosphere.